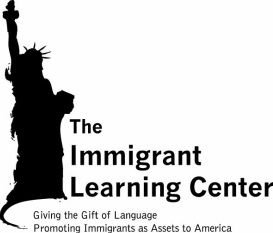 By Kristen Saulnier
According to the United States Census Bureau, as of 2010 the immigrant population of the United States numbered nearly 40 million – about 12% of the population. Many immigrants face significant language and literacy barriers, limiting their options and ability to thrive. The Immigrant Learning Center (ILC) aims to help these immigrants overcome these barriers and be successful in their communities and careers.

A Personal Connection
“I know first-hand what it’s like to start over in a new country,” says Diane Portnoy, ILC’s co-founder and Executive Director. “My parents were Polish Jews who lost their entire families in the Holocaust. Even
after the war, living in Eastern Europe was not a safe environment for Jews. So, when the U.S. passed the Displaced Persons Act in 1948, my parents applied for the visa lottery and won the opportunity to come to
America. I was just a toddler then, but I remember vividly growing up in an all-immigrant community in Malden surrounded by Holocaust survivors where the predominant language was Yiddish. I learned English in public school, and I watched my parents and neighbors struggle to learn the language and make a life for their families in a new country. I saw them work hard, start businesses and send their children off to college.

“I made a career for myself as an adult education teacher. I could relate in a very personal way to the experiences and aspirations of my
students. In the 1980’s, after the wall came down in Germany, I noticed a large influx of Eastern Europeans in Massachusetts. At the same time, there were an increasing number of Vietnamese refugees. The demand for English classes ballooned and the waiting lists grew and grew. To me, these newcomers were just like my parents. I knew how much they needed help and how much they could accomplish if they received it. So, I raised some funds from friends and family and opened The Immigrant Learning Center in November 1992.”

Intensive, Free, Tailored Instruction
In the two decades since, the ILC has educated more than 6,000 individuals from more than 100 countries, growing to include a staff of 28 and a
large number of volunteers. The students at ILC have been a highly diverse adult immigrant population, with widely varying educational backgrounds and native languages. Upon enrollment, each student receives a needs and goals assessment to determine the best curriculum for them. Counseling is provided on an ongoing basis to provide support and keep them on track, as well as to help connect them to services such as healthcare and housing.

Classes at ILC are completely free for students, and the curriculum is uniquely comprehensive. Intensive, immersion-style classes run 10-15 hours a week. Literacy programs for individuals and families reach a segment of the immigrant population that tends to fall through the cracks of traditional ESOL programs. Basic computer literacy is also included in the curriculum. To reach another often-isolated segment of the immigrant population, Senior Conversation helps older adults to become proficient in the everyday English they need to be self-sufficient. Citizenship Class helps prepare those students who will be taking the citizenship exam.

Upper-level students have the opportunity to participate in the Immigrant Theater class, which gave its first performance 10 years ago. By shaping their personal stories into plays, students continue to improve their English while educating others about the immigrant experience.

A Post 9/11 Mandate
ILC’s Public Education Institute is an important piece of the organization’s mission, reaching out to educate native-born Americans and celebrate the contributions of immigrants. Portnoy created the program after the attacks on September 11, 2001. “Our students were afraid to come to class because people who looked ‘foreign’ were being accosted on the street,” she says. Not only was the anti-immigrant rhetoric in the media horrible – people who knew me, and my work, would say, ‘You know, Diane, the problem with this country today is immigrants.’ I knew I had to do something to counteract the
negative stereotypes of immigrants.

“I started the Public Education Institute to conduct research and do public outreach that shows the economic and social contributions of immigrants in the U.S. Since then, we’ve produced 10 research reports, a book, a conference, an annual awards ceremony, online education workshops and more. You know, the German Marshall Fund does an annual survey on immigration issues. They found that the people with the most negative opinions about immigration were also the least likely to have any personal experiences with immigrants. They also found that people’s opinions could change when
presented with the facts. Certainly, here in Massachusetts the public discourse on immigrants and immigration has improved quite a bit. I’d like to think our work has contributed to that change.”

A Lesson in Thoughtful Expansion
The success of ILC’s programs is apparent in the numbers. “When I started the school, we had 60 students and a waiting list of 80,” says Portnoy. “Today, we are fully enrolled with 450 students and the waiting list is 700 people long.” As ILC has grown towards meeting the increased demand, the organization has been very careful about choosing programs.

“The need seems almost limitless and resources are always limited. The temptation is always there to try to do more, to grow faster than our resources allow or to grow in a direction outside our expertise,” Portnoy says of a common non-profit pitfall. “Because a large portion of our budget is privately funded, we are able to change and adapt our programs to meet the needs of our students, but only to the extent that it helps us achieve our mission. When students come to us with other needs or when funders come to us offering resources for off-mission projects, it’s very hard to resist the temptation to help. But, we cannot be all things to all people. We are educators. We give immigrants and refugees a voice by teaching them English and by educating the American public about the benefits of immigration.”

Volunteers are vital to ILC’s work – and many of them started with ILC as students. “All of our volunteers work under the direction of our teaching staff. Because the volunteers are trained and closely supervised by professional educators, we can give them the best opportunities to meet their needs and the students’ needs. Our students often feel a deep attachment to the school because it is here they feel respected, appreciated and understood, and it’s here that they learn the skills they need to thrive in this society. So, many of our volunteers are actually former students. It gives them an opportunity to stay connected to The ILC and to sharpen their English skills. They not only serve as good role models for the other students, but they can support them from the perspective of knowing exactly what they are going through. We even have a couple of staff members who were educators in their home countries, came here as students, then volunteered and were eventually hired as staff.”

What’s on the horizon for ILC? “The newest ILC program is our joint venture with George Mason University in Virginia,” Portnoy says. “Last year, we
launched the Institute for Immigration Research with them. The Institute is located within the College of Humanities and Social Sciences and works closely with Mason’s Center for Social Science Research. The idea is to take the work we’ve been doing at the Public Education Institute up a notch and have an impact on a national scale. This is a really ambitious project for a small, Massachusetts-based school to take on, and I’m excited that our partners at George Mason University are helping it become a reality.”  ∎